The doors opened at 6pm and the people gradually poured themselves in for to one of Nottingham’s night spots. Live music and beers all round for everyone. Colt 48, who are nearing the end of their current tour with Cotton Mouth, 10 Gauge and Down in One. The night was held at The Albert, formerly known as Spanky Van Dykes. The name of the venue may have changed but the general vibe of the place hasn’t. No introduction was needed for Cotton Mouth, mainly cos they did it themselves, but these guys let their music do the talking for them. Local lads, and all from Nottingham, they’ve been around for at least three years but are showing promise and definitely know how to get the crowds going. They are a fusion of rock, metal and grunge along with strong vocals and energetic presence and took the stage with ease. Now 10 Gauge, I’m just going to go out there and say it sound like legendary pros and even their lead man who is from our side of the Atlantic sounds like he like an American export. 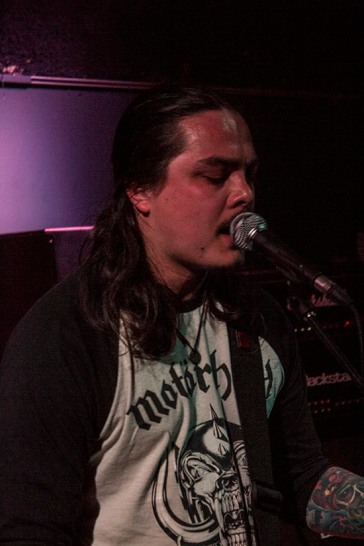 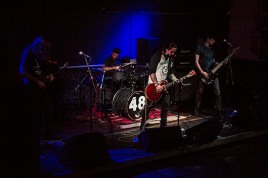 Vocally he just hits all the right notes. By this point the adrenaline was rising, as was the sweat from the excitement of people punching their fists in the air. He got everyone to get on the floor at one point. Down in One were as game for a laugh as they were for creating riffs, the lead singer made a couple of jokes about their drummer being the next 007. Now that’d be interesting. Front-man, Gon, was literally a whirlwind of energy as he just wouldn’t stop moving from either side of the stage. 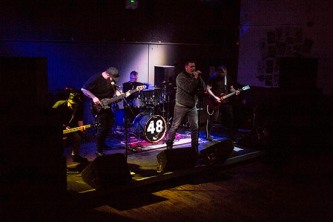 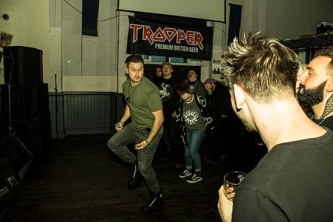 Colt 48 closed the night by singing a mixture of original songs as well as a Gotye cover, ‘Somebody That I used to Know’, just in case you were wondering. I admit it’s always interesting when bands pull-off song covers as you never know where they’re going to take it. Throughout the gig he switched between two microphones and was just a ball of energy throughout and the crowds got up close and personal by this point. Lead singer, Adam Jerome, closed the set on ‘Enemy’, a track so new it’s not even been recorded yet. Overall, a great night. Keep your eyes on these guys, they’ll be coming to a music venue near you.