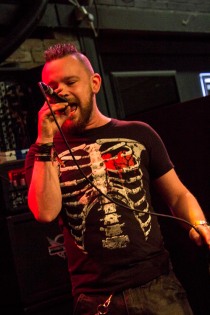 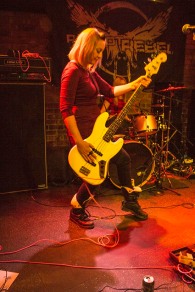 Crowds gathered at the basement of Rock City for the launch of Patriot Rebel’s new LP launch and there was plenty to enjoy as four other bands helped celebrate the launch.

Parasight kicked off the night some top quality rock which was worthy of rock greatest themselves, it was that good and drew a large crowd. You could practically sense the adrenaline rush after a few minutes, and Desensitised, first female duo of the night and these were two girls who defiantly had something to shout about kept everything going. With plenty of material about beer, rubbish boyfriends and weekday antics along with lots of laughs these two are a definitely ones to watch in the future were the local music concerned. Keeping with female leads You Want Fox were the first all-female trio whose oozed adrenaline and bass

Eva Plays Dead kept everything going and took things straight into the crowd and their female lead even serenaded one lucky punter in the process, and the bassist kept the stage antics going with a riff on a speaker. By the end of the night Patriot Rebel owned the stage and ended night the only way it was meant to be: with full-on rock, and adrenaline fuelled mayhem. This was a night full of fresh original material, and these are five guys who have relentlessly proved there worth in the local music scene.

Other pictures from the night: